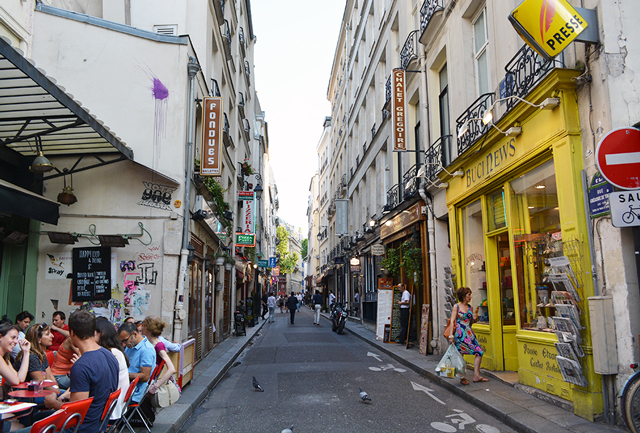 Ah, Paris. The glittering Eiffel Tower, charming al-fresco cafés, romantic walks along the Seine, magnificent buildings… The French capital surely serves as a metaphor for all that is supposedly enchanted, sophisticated and grand in the world. The clichés you often hear are definitely true: couples getting engaged in the beautiful Eiffel Tower surroundings, people sipping wine, city dwellers carrying baguettes underneath the arm. You’ve heard it all before.

You’ll soon discover Paris feeds purely off these overheard expectations and people tend to fantasise about the city as if it were a magical place, where unicorns live and candy floss grows on trees.

This wasn’t the first time I’ve been to Paris. As a first-timer, I felt slightly alienated for not being able to find it the charming city they pictured. “What is wrong with me?”, I thought. I know I’m not an overly romantic person, but was I that cold-hearted? A few years later I gave it another try, still nothing… Just ‘meh’. Apart from the stunning iconic landmarks, I wasn’t impressed, in fact I was a bit disappointed.

Signage and advertising on billboards seem outdated, it’s like someone brought them back from an old sitcom. Ambient music in shops and cafés is a funny mixture of french pop and 80’s & 90’s hits. I was teleported to another era. Have you ever heard of Spotify?

Even though most people speak basic english, the police always refused to speak in English to us. Even worse, they didn’t speak at all. This happened not only once, but twice. I’m talking about urgent situations where we wanted to report a crime or ask for clarifications when we were trapped in the tube for security reasons due to a pro-Palestine manifestation. Not cool.

I’m used to this as London is one of the most expensive cities in the world, but it surprised me that paying €16 for a vegan mushroom crepe, €7 for a small slice of cake or €8 for a beer is quite normal. If you move away from the city centre the prices seem to drop though, but not too much, so better be prepared.

As a vegan, I found Paris so not vegan-friendly. Fear not, you can get by well as there are plenty of vegan & vegetarian restaurants. But it is not one of those cities where you can be spontaneous and expect you’ll find something to eat anywhere.
If you need to have a meal, you better plan where you’re heading beforehand. You’d expect a metropolis like Paris would have foreign food joints everywhere, such as indian, thai, chinese, japanese, mexican. You can still find some but not that easily. Instead all you can find are brasseries in every single corner, which got me thinking…

5. Is cheese and wine all there is?

Sacré bleu, of course not… There’s also croque monsieur, croque madame, omelettes and cold meat platters. But that’s about it. Nearly all cafés and brasseries literally share the same menu. Adding the lack of foreign foods, I’m left wondering why don’t people get bored of eating always the same thing over and over again? No cheeseless sandwiches in sight, no single piece of fruit sold in cafés. Where’s your five-a-day?

Rough sleepers begging for money are an unfortunate sight in the streets of Paris. I spotted an entire family living in the street, the parents and their 3 children…  I’m highly sensitive to generalised injustice and this really shocked me. I have never been in a city where I noticed such a high number of homeless people. Shelter and food are a human right and Paris needs some serious social aid action.

No, really. Graffitis everywhere, tagged walls, electric cables randomly hanging from the ceiling which seemed highly likely to be harmful, or even deadly to commuters. So unsafe – yikes! On my way out, I finally noticed the danger warnings regarding the cables… in French only.

Again the expectations might play a bit part in this. We’ve had the worst service in bars. Once we waited for ages to be served and no waiter cared to pop round our table despite us constantly looking at him. Cashiers don’t say ‘hi’, ‘please’ or ‘thanks’. Maybe Parisians are just unwelcoming to tourists and not in general, but the rumours are out there and proved to be true.

I’m not talking about street art here. There’s literally a tag in every single building – just the perfect way to ruin a landmark. Some are so up high that I have no clue how they even got up there. This doesn’t usually bother me, but it isn’t what you’d expect from an iconic city like Paris. These random acts of vandalism are seriously defacing the city which doesn’t reflect a nice image to those who visit, and it’s even worse to those who call the city their home.

It’s summer and a blazing 35ºC. You do what many sensible people would do while on holidays, which is packing a towel and planning a picnic. There’s a handful of beautiful gardens so you’d expect it would be literally a walk in the park. Well, it’s not. Most gardens and parks in Paris don’t allow you to step on the grass, it’s just for your eyes to see. So better enjoy the view and take your picnic to the gravel corner which is certainly where dogs pee.

11. The fear of being mugged

I don’t know about you but every time I walked in the streets of Paris, I always felt the need to be super careful with my things. I don’t feel safe and I can’t be totally relaxed – there goes the romantic vibe. Maybe it has to do with past experiences though. The first time I’ve been to Paris I’ve witnessed people having their things stolen and young ladies being sexually harassed in public and it gave me the creeps.

I’m sure Paris would benefit a whole lot more if its weirdness was embraced, just like New York City or London did.
You can still have an amazing time if you lower your expectations though, that’s what we did eventually.

Down with the myths!

This review reflects an opinion based on my sole experience only. Please understand it may not be the norm though.

I'm Rita, a lifestyle blogger, married to my best friend. cat mama & vegetarian making the most out of life.